Triveni Sangam is the confluence of three rivers: Ganga, Yamuna and the mythical Saraswati. The point of confluence is a sacrosanct place for Hindus. As Ganga makes her way from Gangotri to the Bay of Bengal travelling through places made sacred by her (Haridwar, Rishikesh,and Kanpur); she meets Yamuna at Sangam, Allahabad before advancing to Varanasi.

In the pre-historic times, River Saraswati was believed to have flown and met with Ganga and Yamuna – which still stays as the confluence, Triveni Sangam in Allahabad. The diverse stages in the northwest movement of River Saraswati get extensively reflected in the Vedas and other ancient manuscripts. According to Hinduism, the early stages concur with the depiction in Rigveda, the middle stages with the  Yajurveda and Atharvaveda while the last stages coincide with the epic, Mahabharata. 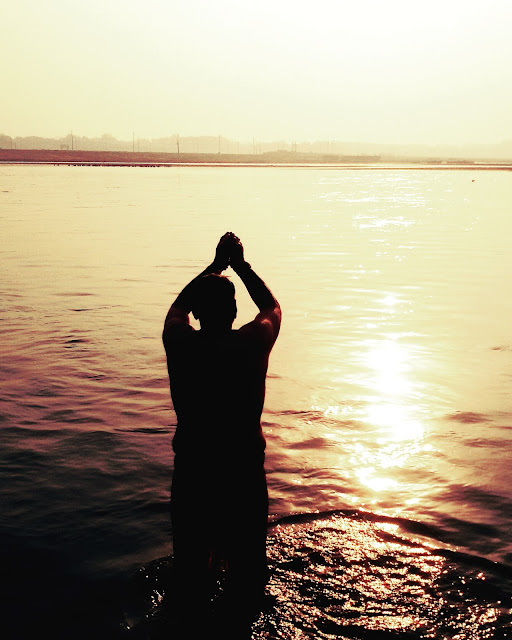 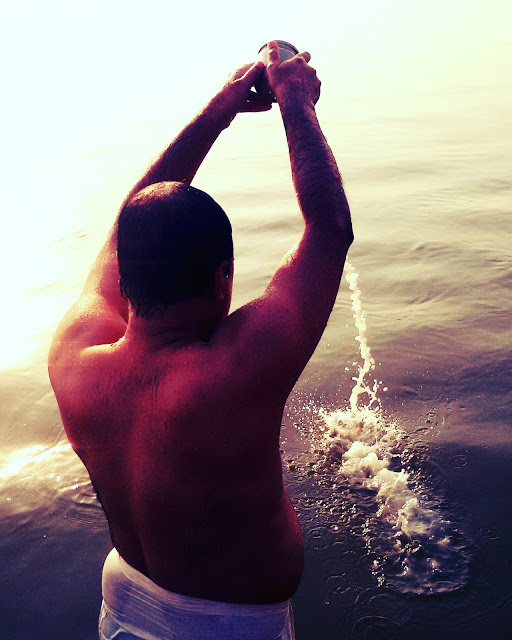 According to Hindu Mythology, it is believed that a bath taken at Triveni Sangam washes away all the sins and frees one from the cycle of rebirth. Prayag is a critical and indispensable part of the Ganga Yamuna Doab, and its history is intrinsically tied with that of the Doab region. The Doab was controlled by many dynasties. The region was a part of the great Mauryan and Gupta Empires from the east and the Kushan Empire from the west before being administered by Kannauj in the fifteenth century. The city was the site of Maratha invasions before India was colonized. 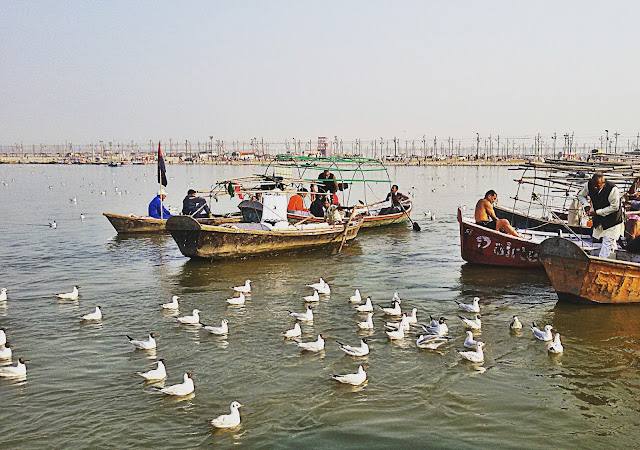 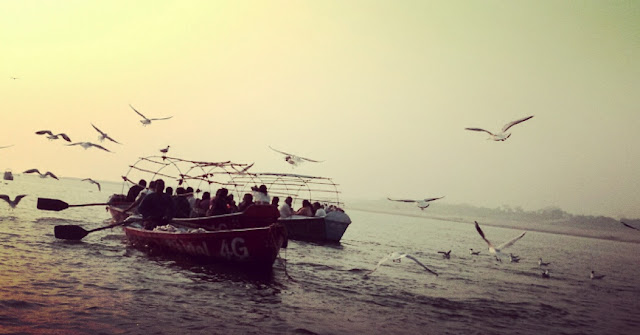 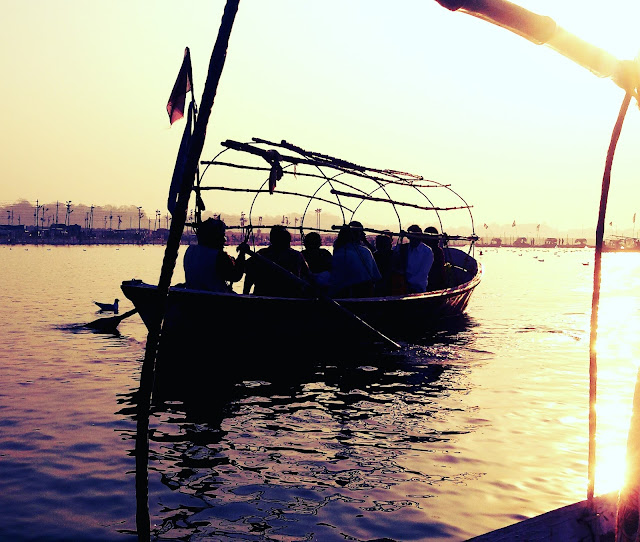 In the Mughal era, Allahabad was a provincial capital under the rule of Jahangir. Emperor Akbar had made it the seat of Illahabad Subah (one of his twelve majestic provinces of significance), assembled a stronghold on the banks of the sangam and renamed the settlement Ilāhābād.
The rivers are unmistakably different at the confluence. The turbid and pale yellow water of the Ganga mixes with the bluish green colour water of the Yamuna, bringing about a breathtaking view. 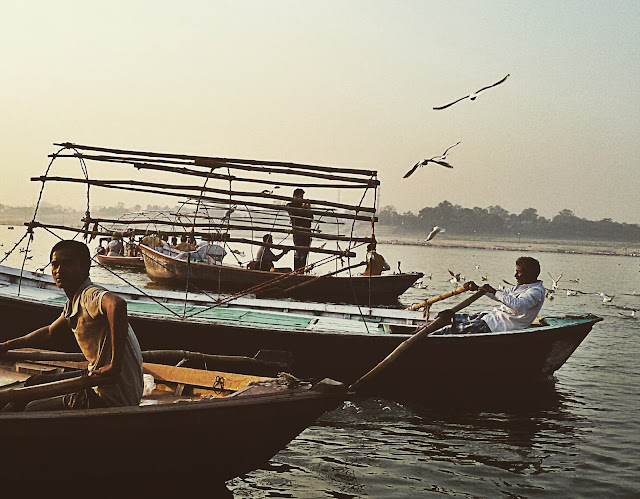 The boats cost as high as three thousand rupees and can be as low as five hundred rupees. Added to that, the rowers and the priests request some extra tips. Tourists and devotees must be prepared to wrangle a considerable amount.
At the confluence, the Ganges is just 4 feet deep,while the Yamuna is 40 feet deep.
During Kumbh Mela, Sangam exhibits an out and out amazing look and feel. Millions of devotees come there to take a bath at Sangam. It is believed that the purification by bathing at Sangam increases by 100 times, while bathing during Kumbh Mela increases it by 1000 times. 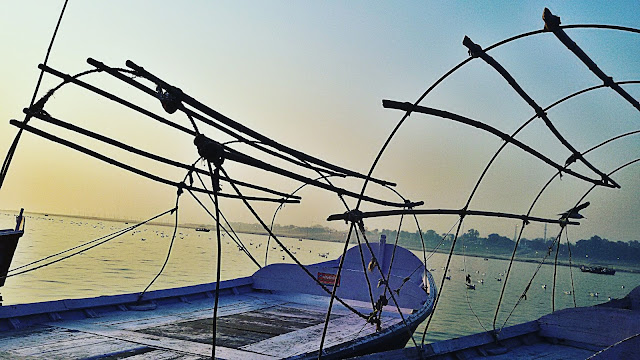 A lot of hotels are available near Sangam Triveni. Some of the best places to visit nearby are the Allahabad fort, Bade Hanuman Jee Temple, Anand Bhavan, All Saints Cathedral and the Company Gardens of Allahabad.

Tourists and devotees can see a lot of local shops selling bangles and beaded accessories for women.

During winters, the Siberian migratory birds take off from Siberia to India. These birds travel from Siberia, travel through Afghanistan and Central Asia and arrive at the birds' Sanctuary at Bharatpur. Sangam is one of the wetlands viewed as one of the breeding places of these birds. 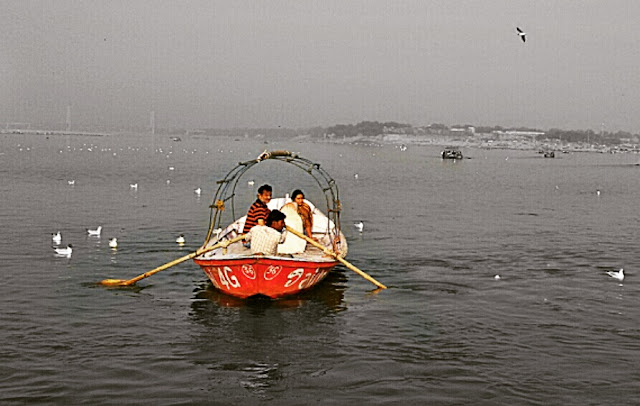 With the breaking down of the Harappan civilisation, the history of Indian civilisation shifted from the Indus basin to the Ganges basin. Sangam Triveni stands tall as a proof of the strong values of the ancient India. 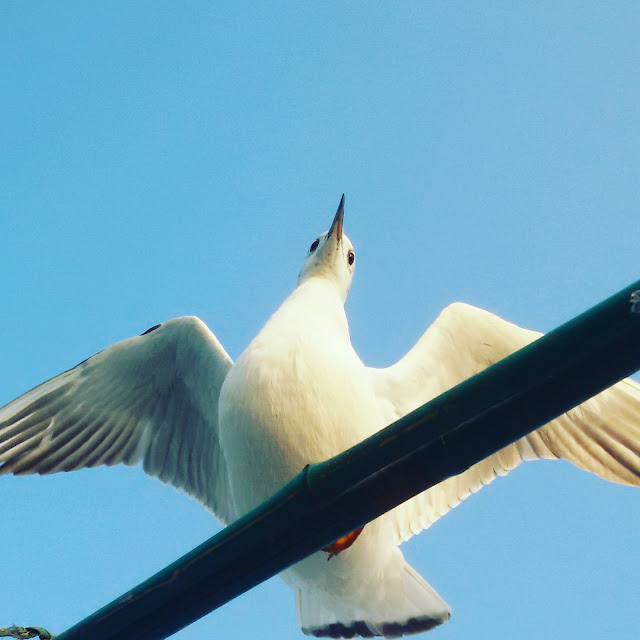